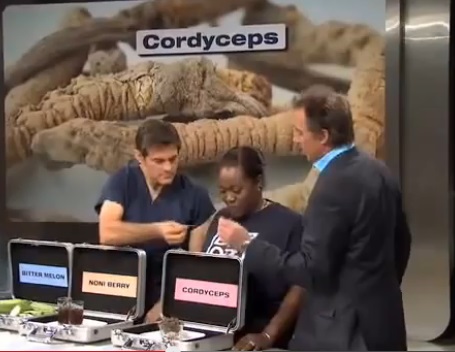 Dr. Oz got a Lady from the studio audience to allow him to put Cordyceps Extract drops on her tongue. Cordyceps is a mushroom, it’s what called an adaptogen, and it helps balance your adrenal stress handler glands, and a lot of times you find you suffer from adrenal exhaustion in a simple way. Do you get irritable when you’re hungry, sometimes when you get hungry, it’s like a timer goes off and says feed me know or I will kill you. With Cordyceps you get your Vitamin C and your adrenal support.

Dr. Oz says he has heard a lot about Cordyceps, Dan Buettner Cures From Around The World says it comes from Tibet China and Cordyceps is the most valuable Asian medicine known. Cordyceps is a fungus, it invades caterpillars’. This fungus has been known to fight breast cancer, to fight different types of skin cancers, and Olympic Athletes have used it as performance enhancers. It obviously tastes terrible but you can buy Cordyceps pills. Cordycepin a compound isolated from the “Caterpillar fungus”. Some work has been published in which Cordyceps sinensis has been used to protect the bone marrow and digestive systems of mice from whole body irradiation. An experiment noted Cordyceps sinensis may protect the liver from damage. An experiment with mice noted the mushroom may have an anti-depressant effect. Researchers have noted that Cordyceps has a hypoglycemic effect and may be beneficial for people with insulin resistance.

Cordyceps (caterpillar fungus, tochukasu) is a parasitic fungus which grows out of insects it has infected. The fungus remains essentially dormant until the caterpillar dies; the fungus then replaces the caterpillar’s body with its own material and grows its stalk upward and above-ground. The mushroom has a long history in traditional Chinese medicine as well as traditional Tibetan medicine.